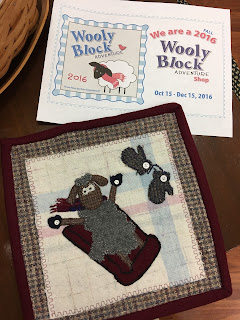 So...Wooly Block Adventure...What's that?  Well, If you're familiar with the Row By Row Experience, the Wooly Block program is a "spin off" .. ha ha... do you get what I'm saying?  Basically, It's a great way to get you back into the fabric store in a new and different way!  I love it!  There are participants all over the US and other countries that participate in these events!  This particular year, we were the ONLY store representing Kansas.  I was just thrilled at the idea of that!  I'm a PROUD Kansas born and raised girl!
Anyone who came into the store during the specified time frame could receive ONE free pattern, or choose to purchase the kit with the fabric shown.  All wool pieces are to be cut so that customers can follow directions and make the block just as shown.  I measured and cut many pieces of wool in preparation for the big event!  Baggies were filled with all the papers, fabrics and embellishments.
Before this big project I'd not really done much with wool, but love the concept of it.  So many fun and cute things out there!  A really neat material when you think about it!  And not just at fabric stores either!  But.... I need to stay focused and tell you about the Fabric part of wool, and how I was involved in creating this cute little Wooly Block!
At the time of this project I was managing a really fun little store, and we had just wrapped up our RxR program and were wanting to keep the momentum and excitement of the newly added fabric section going.  So, I said I'd be happy to venture out and make this one on my own!  And I did!  You'll hear more about the Row By Row co-design and great travel adventure at later time!  Today it's a drizzly day, and winter is wrapping up, so I want to share this cute little sledding sheep story with you while the winter/sledding season is still here! 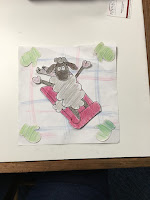 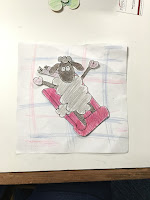 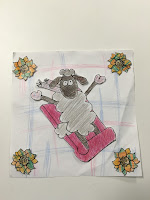 The rules are stated as far as what size the Wooly Block can be, so my imagination must stay within these specific dimensions!  This was a good thing.  I can sometimes get a little more creative than time will realistically allow me to complete my project!  I do like to craft!  Another rule was that the entire block needed to be made from wool!  No other fabrics were to be used!  Embellishments are ok, but NO other fabric than wool!
So I needed to come up with a design and started drawing something out on paper.  Wool makes me think winter, and it also makes me think of Sheep!  So...I combined the two and designed a winter scene with an adorable sheep in it!  Don't you think he's a cutie?  I tried to think of different ways to add something to the block.  It looked a bit plain.  The idea of sunflowers sounded perfect for a Kansas scene, but it just didn't look on paper what I had in my head.  Mittens looked better!
I am not the artist that my mother and sister are, but I was able to come up with a child-like idea for this project, and I really like it!  We got the mittens from a die-cut machine and were able to provide them already cut in the kit!  That was nice!  The remainder of the pieces were to be cut and appliquéd according to the crafters liking.  Once I started putting it all together, I decided that two mittens in the corner with a string looked best, so that's how I ended the final design!  Also included in the kit were two sizes of buttons for the mittens.  Sometimes it's the little extras that really make the difference!  I decided to embroider the sled to make it really "POP".  Knots for the eyes and this little guy is ready to go on his great sledding adventure around the world!  And he did!  We sold kits through the mail after the program ended, and he got to travel to many neat places! 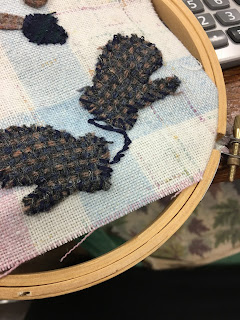 I chose to do a simple whip stitch to add the pieces to my block.  This was something I could do between helping customers!  Not my best work, but when rushed to meet a deadline sometimes you just get the job done!  I spent more of my time making sure the wording and directions were of good quality!  There is more to proper wording and explanation on paper than one would think!  I've read some crazy patterns and now understand just why I maybe don't understand them.  It's difficult to teach and express yourself directionally on paper!
I did feel that the finished block needed a little something extra to display.  So for the sample I machine layered it onto another piece of wool that was available at the store.  I used a stitch that would keep the block from fraying.  This also added some thickness and depth to the material.  It really does need that if you're going to be handling it much.    Next came a border.  Not only did it give a nice edge to the piece, but it gave something thick to hold onto when hanging for display!
And now you've heard the story of the time I became Inquisitive about working with wool in a new and exciting way, designing a pattern on my own, and creating and selling the kits.  Start to finish ... the project was mine!  I did it folks.... I did it!  Another adventure in the books! 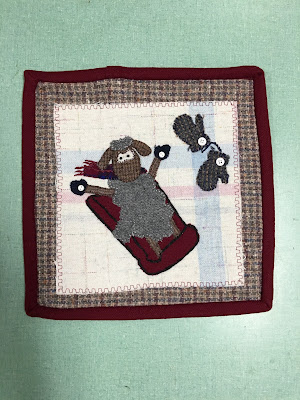 Posted by The Inquisitive Farmwife at 5:31 PM