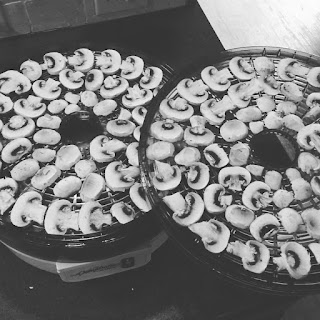 I've been on a bit of a dehydrating kick!  It get's quite addictive actually!  You can pretty much dehydrate anything you want!   Mushrooms is one of those items that I would've NEVER dreamed of until I had it introduced to me!  I was at a local mother's craft group when a friend brought these AMAZING little snacks called Mushroom Puffs.  I was HOOKED!  SO yummy!  I asked for the recipe and she had used DEHYDRATED MUSHROOMS!  No kidding!
Well, me being me.... I just had to put that on my list of things to do!  I mean... I must try this myself!    I do have a dehydrator that I rarely was using at that time, so in good conscious I really needed an excuse to dust it off.  Well, time went by and I got busy with other things and kinda put this idea way in the back of my mind.  Well, until one day at the grocery store they had reduced produce.  Low and behold there were several of these mushrooms marked down to just $0.49 a package!  I grabbed the entire stack!  There were whole ones, sliced ones, you name it!  I used the whole ones in another recipe and took advantage of the already sliced ones for dehydrating! 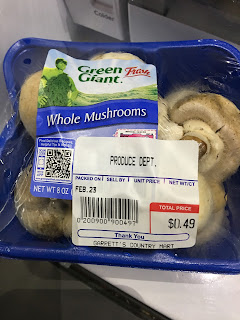 Slicing a whole mushroom isn't a big deal, I just decided it would be fast and easy, and I really wanted to make stuffed mushrooms with the whole ones!  To wash you simply take a dampened paper towel and wipe the entire surface of the mushroom until clean.  NEVER put mushrooms in a bowl of water to wash!  They're mushrooms....they'll soak up all that liquid and not only reabsorb the yucky water, but end up giving you slimy yucky wet mushrooms!
To slice, you simply pat dry with paper towel and either cut with a knife, or I use an egg slicer!  That really saves me time and frustration!  A tip is to put the stem facing you, but not sure if it really makes a huge difference or not?  I don't smoosh them as much that way. 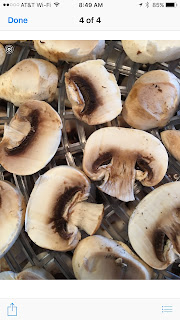 Once they're at the size you desire, you just spread them out on your dehydrating tray.  Make sure they don't touch each other, allowing for good air flow.  I like how pretty they look here!  With my dehydrator, I just rotate the racks and keep an eye on them.  I don't have a fancy timer or temperature gauge.  I mean... the thing is probably 20 years old!  But she works, and she's mine! 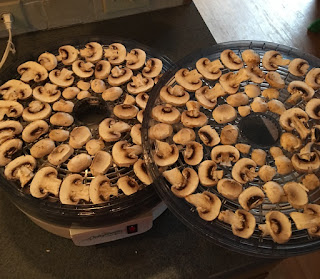 I don't have a picture of the finished product for you today, but I do have that Mushroom Puff recipe I can share with you!  You can re-hydrate mushrooms for any of your regular recipes.  Ours have been used in spaghetti, on pizza, on top of swiss burgers, in various casseroles and more!
Mushroom Puffs
Ingredients:
1 can crescent rolls
1   8 oz. cream cheese
2 tbs milk
2 tbs dehydrated crushed button mushrooms
Salt, pepper, and other desired seasonings
Instructions:
Rehydrate mushrooms in water, drain.
Beat cream cheese, milk, mushrooms, and seasonings.
Roll our crescent rolls with rolling pin.  Spread cream cheese mixture evenly over crescent rolls.  Roll tightly.  Slice into 1 inch rolls.  Place on cookie sheet.  Bake at 350* for 20 min.
Come Join me on Social Media:
www.facebook.com/TheInquisitiveFarmwife
www.Twitter.com/@IFarmwife
www.instagram.com/theinquisitivefarmwife
Posted by The Inquisitive Farmwife at 5:07 AM